Jared started reading comics in earnest in late middle school/early high school when he found out that you could get collections of them at the library and read them for free. This was later compounded by learning that there was a comic book store called “Comicopia” near his high school that stocked superhero comics and indie books and manga and all sorts of neat stuff. Really, he had no choice but to commit himself to the medium then and there. He also like weird movies, semi-obscure music, and having too many hobbies at the same time, and if he let him he will tell you about all of it in appalling detail.

Hi Friends! It’s been a while, what with everything being closed down and people hunkering down at home and the like. It’s been a weird time and I’ve decided that it’s time to revive this column, so that you might be able to find something to read that will make all of this a little more bearable. Here’s some highlights of what’s come out over the last few months. 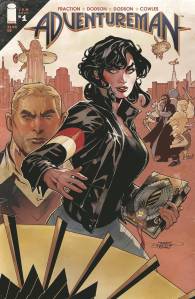 Both a tribute to and reinvention of two-fisted pulp heroes of the early 20th century, Adventureman splits its story between the fictional tales of Adventureman, a pulp hero who fights all kinds of astonishing, superpowered evil, and Claire, a hearing-impared single mother who enjoys reading Adventureman stories with her young son. But things get strange when Claire comes into possession of a book that explains how to BE Adventureman and all the trouble that comes with possessing such a book. Worth picking up for the Dodsons artwork alone, which makes both the pulp-inspired city of Adventureman and the mundane world of Claire sing. 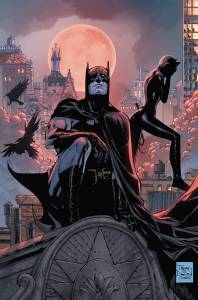 I was curious to see what Tynion’s run was going to be like after reading his excellent work in Something Is Killing The Children and it has not disappointed. Batman must fight a cadre of foes while trying to uncover a secret about the Designer, a shadowy superthief who appears to have set his sights on Gotham, and perhaps not for the first time. Tynion has a great handle on how to write Batman and his supporting cast (not surprising given how much Batman Tynion has written at the point) and the stable of artists he’s working with are a treat, easily matching the drama and mystery of the story. While this storyline still has a few issue to go, it’s well worth picking up and checking out.

In the far future, the Decepticons have conquered earth and only the remnants of the once powerful Skynet still oppose them. Hoping to thwart them before they even start, a T-800 model robot – a Terminator – is sent back to 1984 to stop the Decipticons from waking up and attacking the earth. Along the way, the T-800 picks/kidnaps a guide: a put up on diner waitress named Sarah Connor. Together, and maybe with the help of some other transforming robots, can they stop the Decepticon menace?

If “the T-800, Sarah Connor, and Optimus Prime team up to fight the Decepticons” doesn’t make you want to read this, I really don’t know what. (And how did it take this long for the two most popular robot franchises of the 20th century to have a crossover?)

When Minare Koda meets a radio producer at a bar while drowning her deadbeat-ex-boyfriend-induced sorrows, little did she suspect that it would lead to her rant being played on the radio and receiving enough attention that said producer offers her a slot hosting her own show (at 3 in the morning, sure, but hey, a slot is a slot). Can she find success while dealing with being fired from her day job, dealing with dippy would-be suitors, coming up with good material for her show, and generally being kind of a mess? Wave, Listen To Me! is funny, manic, and sharp, and it is deeply amusing to see Samura apply all the artistic techniques he used making Blade of the Immortal to, say, illustrate Minare announcing to the world that she will hunt ex to the ends of the world and end him. It’s a fun time

A charming fantasy story with all the elements one could want. Magic! Living plants! Elves(?) living in secret due to something called “the Blood Laws”! Political intrigue! Hunky boys! With excellent art by Dialynas and just a hint of the horrors probably to come, get this now and then brag to your friends about you were ahead of the curve later. (Hey, more Tynion, who would have guessed?)