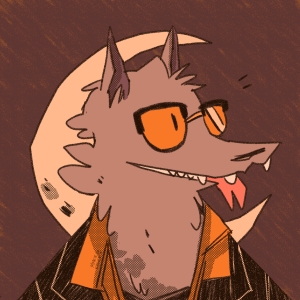 Jared started reading comics in earnest in late middle school/early high school when he found out that you could get collections of them at the library and read them for free. This was later compounded by learning that there was a comic book store called “Comicopia” near his high school that stocked superhero comics and indie books and manga and all sorts of neat stuff. Really, he had no choice but to commit himself to the medium then and there. He also like weird movies, semi-obscure music, and having too many hobbies at the same time, and if he let him he will tell you about all of it in appalling detail.

The first collection of the Boom! Studios published horror hit from 2019, Something Is Killing The Children focuses on the previously sleepy town of Archer’s Peak, where, as the title suggests, Something has been Killing the Children. The only person who can stop the Something is Erica Slaughter, a monster hunter who gets her orders from a possessed stuffed animal and does her best to draw as little attention to herself as she can, least the local authorities conclude that she is the Something Killing the Children. Assisted only by James, a local boy who narrowly avoided dying at the hands of the monster and determined to help defeat the creature that killed his friends, Erica must find the monster and stop it before its body count grows. Tight writing and exceptional art highlight this atmospheric horror story and will leave you clamoring for volume 2. (This edition of this collection will be exclusive to comic shops and will not be available at general bookstores until May, so get it now so you can impress you friends by being so far ahead of the curve.)

Science fiction series set in a future where America has become divided between sleek, futuristic, all-seems-too-good-to-be-true megacities that provide for every need and the dwindling rural population, who live off the land and reject all modern technology in defiance of their would-be city overlords. Life can be hard in the future, where resources outside of the city remain scarce and rejecting technology can cause as many problems as it solves, especially when the nearby city wants to turn your town into a new, terraformed nature reserve. An intriguing first issue to a fascinating looking series, be sure to check out the backmatter, which presents some fun in-universe letters that help expand on the state of the world outside of the main story. 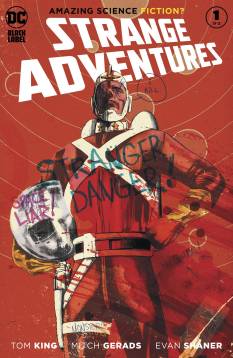 Adam Strange has published his memoirs detailing his life living on the planet Rann and fighting the invading Pykkt Empire! Unfortunately, the positive attention he’s received has been mixed with accusations of war crimes and brutality by Strange against the Pykkts and he hires a surprise super-detective to investigate this past and prove his innocence. Though a slow start for the series, this issue sets up an intriguing premise and a promising start that will appeal to fans of King’s takes on the Omega Men, the Vision and Mister Miracle and wonderfully assisted by excellent are from Gerads and Shaner that help visually define the two contrasting aspects of Strange’s life, shining Silver Age optimism from Shaner and harsher reality of the present from Gerads. 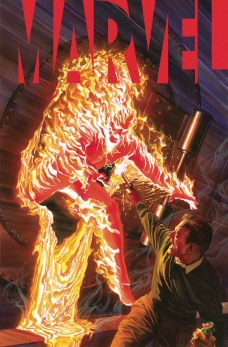 The newest of Marvel’s many, many series celebrating 25th anniversary of Marvels, this issue features an excellent Spider-Man story drawn by Frank Espinosa in an expressive, almost watercolor style as well as oh my god did the put a Kurt Busiek/Steve Rude joint in here? And the wrap-around story features Nightmare wandering around bizarre landscapes painted by Alex Ross??

…Yeah, if any of those sentences made sense to you, you’re gonna wanna pick this one up. Also: incredibly boss cover by Alex Ross featuring the original Human Torch.

Kishimoto’s long-awaited new series, Samurai 8 follows the adventures of Hachimaru, a perpetually sick boy who stays at home being taken care of by his father and dreaming of leaving home and becoming a great warrior. When he learns that his body has the ability to transform him into a samurai, Hachimaru teams up with his new mentor (a samurai trapped in the body of robotic anthropomorphic cat) and sets off to train and fight evil. While an obvious must for long-time fans of Naruto, Samurai 8 is also a blast to read just to see Kishimoto express his love for the kind of grandiose, big concept science fiction that he could hint at but never fully explore in Naruto. Paired with excellent, expressive, and clean-lined art by Okubo, this series is well worth checking out is shonen action is your thing.